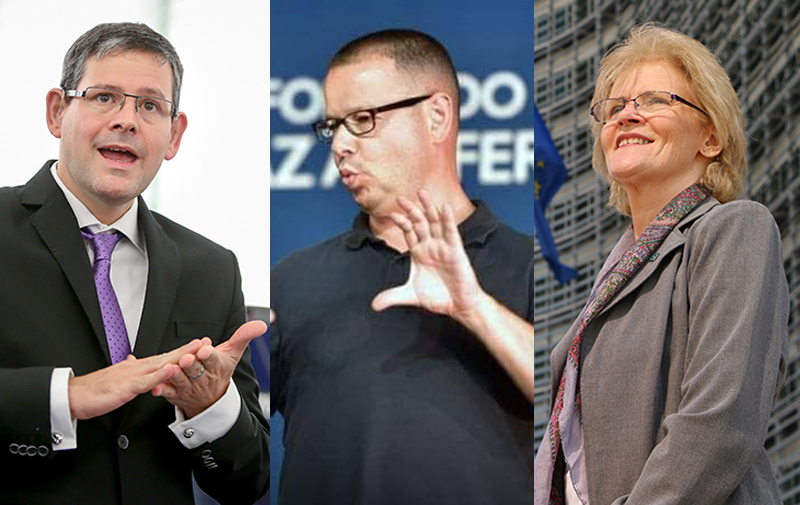 As the European Elections are coming up, the Swedish Deaf Magazine has interviewed three people: Adam Kosa who now sits in the European Parliament and runs for re-election, Almicar José Morais from Portugal who wants to enter the Parliament, and Lolo Danielsson from the European Union of the Deaf (EUD) board.

The interviews are also available in Swedish – click here. 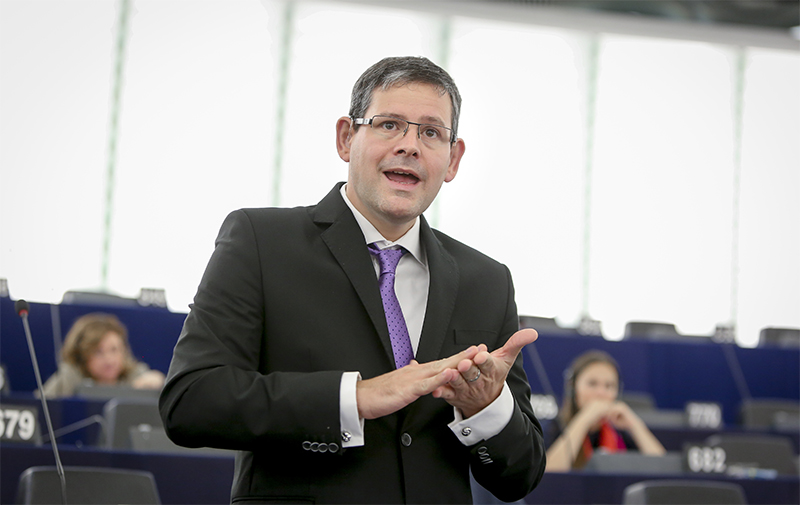 Hello there, Adam Kosa from Hungary. You are one of the Parliament’s two deaf members and have served two terms. Now you want to run for re-election. How comes?
– I want to continue my work with rights for people with disabilities in Europe. The work never ends. The ten years I have spent in the European Parliament have reaped many successes. But of course, much work remains.

You are listed 9th on the ballot paper for your party, Fidesz from Hungary. What do you think of your chances of staying in the European Parliament?
– My party can possibly obtain 13 seats in the Parliament. If we look at my former rank on the ballot paper in the last election (12th) and in the 2009 election (11th) then I have a greater chance of being elected at the next election. I’m happy to see that my party believes in me and thinks I have done a good job.

Helga Stevens, who currently is the other deaf EU parliamentarian, will not run for re-election this year. What do you think about it?
– Too bad. Helga Stevens and I have had a fine collaboration over the past five years. We have been able to show that we, as deaf persons, work for all citizens of the EU, and not just for those with disabilities.

For the next term, which issues are most dear to you?
– Implementation of the UN Convention on the Rights of Persons with Disabilities at EU level. The EU formally acceded to the Convention (2010) but still does not fully respect it. The EU institutions are not yet accessible. One example is that debates broadcast live are not captioned nor interpreted to sign language.

– Every EU country shall have the right to design its social system. But the problem is that the countries’ social systems differ too much. I want to work for the social systems and benefits to be more similar and fair. A good example is the access to interpreting services. It varies depending on where you live, and it is difficult for EU citizens to get an interpreter when they are in another EU country. Two other examples that vary much in the EU countries are the resources provided in the labor market, and access to education.

– I respect the fact that the EU members have different views on migration, that is part of their sovereignty. But one thing is certain: migration is not a human right. We shall welcome people whose life is threatened in their country of origin but when the danger is over, we need to help them to return home. In my opinion, solidarity has a broader meaning and exists in more than one form. Sweden has welcomed migrants, and Hungary brings help to Syria: we rebuild schools and ensure that Syrians can return and live in their own land safely. 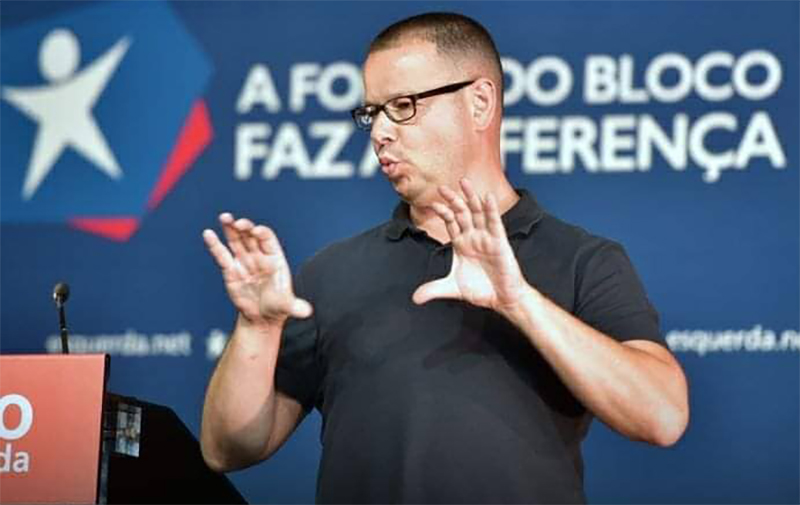 Hello there, Almícar José Morais. You are one of the three deaf* EU candidates. How comes you want to sit in the European Parliament?
– I represent Bloco de Esquerda (Left Block in Portuguese). My party has currently a member in the European Parliament and she has got to deal with sign language-related issues. Usually she had first some dialogue with Helga Stevens (one of the Parliament’s two deaf members) and then she consulted me. She and the party overall believe that it is better that I, as deaf and a sign language speaker, sit in the Parliament so I have accepted to be a candidate. The idea is that I will represent people with disabilities, not just deaf people. Furthermore, I want to counterbalance the right-wing populism that has grown strong in some parts of Europe, in which Adam Kosa’s party Fidesz is part of.

You are ranked 10th on the ballot paper for your party. How much chance do you think you have to enter the European Parliament?
– Currently, my party has only one member in the European Parliament. I think we can get between one and three seats in the Parliament, considering how popular the Bloco de Esquerda is here in Portugal. So, unfortunately, I don’t have much chance of coming in. Nor have I succeeded in being elected into a local political assembly earlier.

Who are you?
– I teach and research in Portuguese sign language at a university and work as a sign language teacher at a high school for the deaf. Currently, I study sociology at Master’s level and will soon defend my thesis on deafhood. I am Vice Chairman of the the Portuguese Federation of Associations of the Deaf. Politically, I believe that socialism should precede capitalism. We must safeguard social welfare and ensure that human rights are met.

* As by now, there are seven deaf EU candidates. The five other names can be found below. We have not had an opportunity to interview them for our latest issue of the printed magazine. 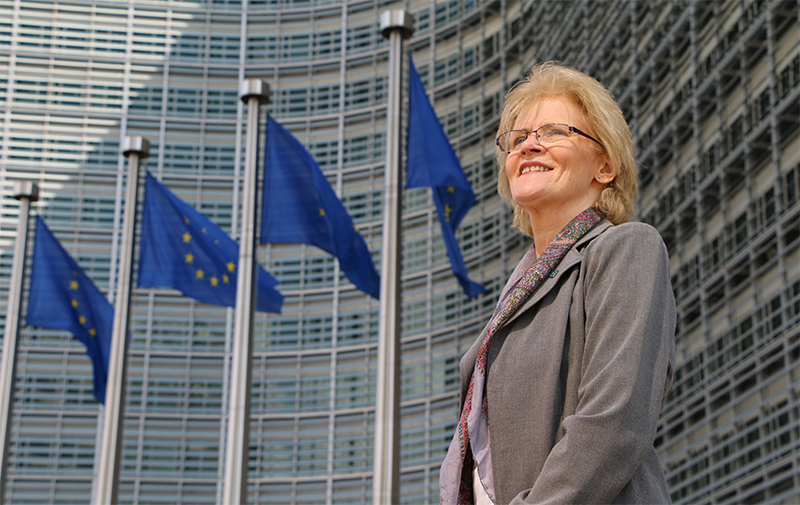 Hello there, Lolo Danielsson from Sweden. You are a board member of the European Union of the Deaf (EUD). Why should we vote in the European Elections?
– To raise awareness of democracy in the EU. If you go and vote in the election, you take responsibility for your and other people’s lives. Through the EU, we have great influence on our private life and the public, from local level up to European level. Therefore, it is important to participate and shape the future of the EU.

– But then of course it assumes that everyone is able to go and vote without meeting any obstacles. I think about the 80 million EU citizens who have some kind of disability. The information about the election and the polling stations must be made accessible to them. For us deaf people, for example, there should be information in sign language.

What issues does the EUD consider to be the most important in the elections?
– Even more equal conditions for the deaf based on the human rights and fundamental freedoms established in the European Convention and the UN Convention on the Rights of Persons with Disabilities. This applies to topics such as sign language, accessibility, employment and education.

– An example of an important issue that needs to be monitored is how the newly adopted European Accessibility Act will be applied in every EU country. (The directive states that there must be minimum requirements on how accessible devices and services should be for people with disabilities. This can include, for example, smart phones, e-books and 112).

– As for the emergency telephone number 112, there must be a universal design that allows all citizens of the EU to reach the emergency service. Deaf people, for example, should be able to press a certain button wherever they are in the EU. A universal product that is accessible to everyone is something we all would benefit from. It is more cost-effective than developing different solutions in every country.

What does the EUD hope that the EU will have achieved by the next election in 2024?
– I would like to emphasize that the EUD has a strategic plan that is until 2021. We have a different term period than the EU and we follow the motions that our members (national deaf associations) have decided. However, the EUD follows the EU’s current issues, and has its own board and staff working on the areas that the EUD prioritises, for example, legislative measures, labor market and gender equality. I am responsible for the gender equality working group whose goal is to raise awareness about gender equality at all levels, from the EUD to national deaf associations and its local organizations.

– We supported the first Deaf Women European Forum that was held in Valencia, Spain last fall. In order to continue the work on deaf women’s rights, the Forum has issued the Valencia Declaration which states, among other things, that every national deaf association in Europe is encouraged to review the current situation for deaf women in their country, for example, access to various social benefits and support, and to encourage women’s leadership.

– We are now discussing refugee issues within the EUD. It is a current matter, how, for example, are the rights of deaf refugees being met? Refugees, as we already know, create conflicts of interest within the EU.