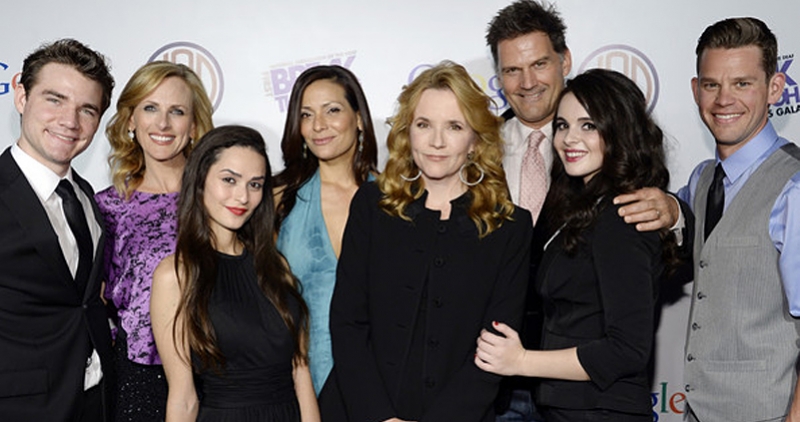 The actors from Switched at Birth about their roles.

Switched at Birth is a popular American TV show about two teenage girls who were mixed up at birth and grow up with ”wrong” family. When they become teenagers, the mistake gets discovered and the families get in touch with each other. At the reunion, it turns out that one of the daughters is deaf, so her biological family must learn sign language.

The TV series has been running since 2011. It has several deaf characters, and all of them are played by either deaf or hard of hearing actors. DT has been in contact with deaf actors: Stephanie Nogueras, Ryan Lane, Daniel N Durant and Linda Bove.
The actors agree that it is not OK when a hearing plays a deaf role. They think it is impossible for a hearing person to convincingly act deaf.
– A white actor would never play a black role, because there is a realization that is inappropriate, says Daniel N Durant. He means that the same applies to a hearing playing deaf.

Stephanie Nogueras says it is definitely not ok when hearing actors play deaf. Why some movies cast hearing to play deaf may depend on factors such as a low budget so it would be cheaper to hire a hearing actor instead. Or the production worries that it would be too complicated with casting a deaf actor so they go for a hearing instead.
Daniel N Durant tells that another film team, Medeas, picked a hearing actor for a deaf character for a movie although they explained how it would be inappropriate to have a hearing actor. But the director insisted on having this hearing actor because she had been nominated for an Oscar earlier. Therefore, he believed she could take on the challenge and play a deaf character.

Linda Bove, an experienced deaf American actress explains that Medeas chose to hire a hearing actor because they also listened to one person from a stunt organization. The counselor was of the opinion that a deaf person was not capable of doing stunts, and that communication would be difficult. It was the only reason to why they chose to pick a hearing actor instead. She thinks it was too awful that they based the decision on a single perspective. In addition, the actress Catalina Sandina Moreno used later in an interview the word ”deaf-mute” which aroused many reactions. It reveals that she who played deaf does not know anything about deaf, argues Linda Bove.
Stephanie Nogueras means that even if it is a very good actor, she/he still cannot learn sign language in a short time.
– No hearing actor can ever play a deaf character, says Stephanie Nogueras.

Ryan Lane looks at this as very frustrating, that they choose to cast hearing actors over deaf actors.
– It’s frustrating because as we all know, there aren’t enough roles for deaf actors, so, when one comes along, it’s really hard to take when a hearing actor gets the role and we don’t even get a chance to audition, says Ryan.
Stephanie Nogueras feels that the communication with the Switched at Birth team is positive because they always have sign language interpreters ready.
– Communication is really important because we all can express our needs and concerns. We all have interpreters on set. Everybody is friendly which is a plus, says Stephanie Nogueras.
Ryan Lane tells that they even have taught the production team some American Sign Language.
– We have taught the crew some ASL. We also use our voices and body language, says he.

The impact that Switched at Birth has received has contributed to great appreciation among both deaf, hard of hearing and hearing Americans. Many young viewers are very positive and like the show a lot, says Linda Bove. Daniel N Durant also gets the impression that many viewers get so interested that they want to learn sign language.
– In America the hearing viewers tend to be mesmerized by the Deaf characters and become very interested in learning more about our beautiful language and culture. Switched at birth is still a popular show and it is clear that people are interested in learning more about Deaf characters, says Daniel N Durant.
– We strive to inspire people around the world. We are striving to be good role models. More and more hearing people are learning sign language which is really nice. Deaf people are slowly but steadily getting opportunities, Stephanie Nogueras wraps up.

Here you can read more about the French blockbuster, The Bélier Family, in which deaf roles are played by hearing actors.

(The article about Switched at Birth is available in Swedish. Read here.)