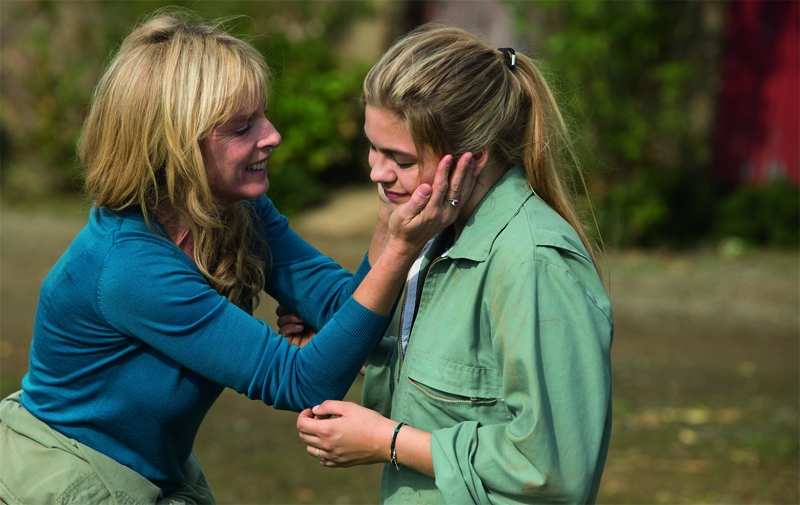 The Bélier Family was a huge success in its country France when it was released last Christmas. More than six million Frenchmen have seen the movie. But there is a division of opinion among the deaf people about the deaf parents in the movie being played by hearing actors.

The Bélier Family has been labeled as a feel-good movie in the media, equal to Amelie from Montmartre and The Intouchables. The Béliers is a farm family in which everyone is deaf except for the 16 years old daughter Paula who is CODA (Child of Deaf Adults). We get to join them in their everyday life and see them taking care of their cows and selling cheese on markets. Paula acts as the interpreter in the family; when the parents want to know what is said on a TV-show with no subtitles, or when they get a phone call.
When Paula takes music classes at school, her teacher acknowledges her fantastic singing voice and encourages her to apply for a music school in Paris. Therefore, she faces a difficult choice: sticking with her family in the countryside or attending the school of her dreams.

The parents are played by Karin Viard and Francois Damiens, and the daughter by Louane Emera. According to the director Eric Lartigau, they learned French Sign Language (LSF) in between four and six months prior to the film shooting.
– The director wanted celebraties in the movie as he thought it then would attract more attention, says Jean-Yves Augros who is in charge of the cultural activities of the International Visual Theatre (IVT), on Emmanuelle Laborit’s behalf.
Emmanuelle Laborit is a well-known deaf actor in France and also the director of IVT. She was not surprised when she noticed how the sign language that the parents and the daughter used in the movie was obviously rehearsed.
– A person from the production team contacted us and asked if we could be their sign language teachers. We said no and explained that they should cast deaf and CODA actors instead, tells Jean-Yves Augros.

The team ended up finding another deaf teacher.  In a Behind-the-Scenes clip, we can see how he is teaching sign language to the actors, and correcting Karin Viard’s handshape. The deaf brother Quentin is played by Luca Gelberg, who is deaf. He has a little supporting role in the movie, and signs just a little.
– It is unfortunate, says Jean-Yves Augros and continues that among deaf and hard of hearing, there are two camps:
– Meanwhile one camp is negative about the hearing actors’ sign language efforts, the other camp thinks it is positive that the movie inspires people to want learning sign language.

When asked if it really is true that CODAs in France today must help their deaf parents as much as that, Jean-Yves Augros replies that yes, it is common. Far from all the television programs are subtitled. The tele and videocommunications relay service is not as developed as in the Nordic countries.
Kamel Ben Kahia, deaf sign language teacher residing outside Paris, was one of those who liked the movie. He enjoys watching a positive film about deaf people who are not afraid to take for themselves. And he believes that it can be considered as credible that a deaf farm family has a different sign language than deaf people in big cities.
– When a walking and sighted actor plays blind or a wheelchair-bound person, we don’t react. But why do we react when hearing plays deaf?

Here you can read more about the popular American TV Show, Switched at Birth, in which deaf roles are actually played by deaf actors.

(The article about the Bélier Family movie is available in Swedish. Read here.)