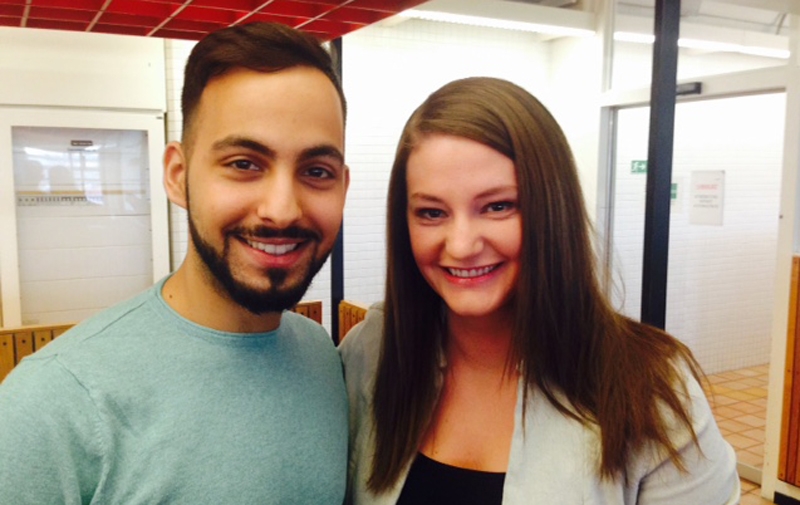 Last year the Danish public service company, DR, hosted the Eurovision song contest in Copenhagen. They also offered sign language performance although only in Danish Sign Language. DR was inspired by SVT. The whole world could follow the broadcasting from Copenhagen. The Austrian singer, Conchita Wurst, won the competition. Therefore the host baton went to Vienna this year.
ORF, responible for the event, goes further than DR. The two semi-finals on May, 19 and 21, and the final on May, 23, will namely be performed in International Signs.
– It will be very interesting to watch Eurovision Song Contest in International Signs, Tommy Krångh says. 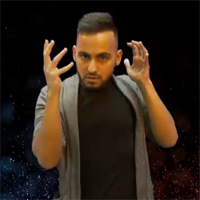 According to Delil Yilmaz the Austrian ORF concept will be a bit different from the Swedish approach. It is that the sign language artists shall stand still and, like he expresses, let the hands dance. And they shall not sign “piano”, “violin” and like that just to fill out when the competitors croon and hold an instrument. They shall rather figure out something to sign to fill out. On the ORF site you can take a look at Delil Yilmaz’s storytelling performance of the Conchita Wurst lyric, Rise Like a Phoenix.
– I think it resembles of sign language poetry, Tommy Krångh says. He underlines that he does not want to say what is right and wrong. He tells that he and his colleagues were criticized earlier because of having differed too much from the lyrics by inventing signs to fill out while the competing participants crooned and held an instrument. This year they were closer to the original by imitating the contestants, like when they played violin.

ORF will have six sign language artists. Five of them are deaf and hard of hearing and one is hearing (Delil Yilmaz). Two certified deaf sign language will interpret the anchors and intermissions. They have two hearing sign language interpreters in the background that work as relay interpreters and interpret from English to Austrian Sign Language. The deaf interpreters will in their turn interpret from Austrian Sign Language to International Signs. The hearing interpreters will not be visible in the TV screen. The team is diversified – they originate from different countries. See the list below.
– We want to show that it does not matter if we are deaf, hard of hearing or hearing, where we come from and who we are. The most important part is that we all know sign language, Delil Yilmaz explains.
He says that he has heard from his deaf friends in Austria that the sign language version of the Swedish Song Contest has not really become a hit among deaf viewers in Sweden. It was more hearing viewers who were impressed – they were particularly fond of Tommy Krångh’s empathetic sign language performance, which gained enormous attention in the whole world.
– It is important to us that we do this for the deaf target group. If deaf are satisified, then I am satisified, Delil Yilmaz explains.
He wants to stress that he has respect for Tommy Krångh and thinks it is fantastic that the sign language has got lots of attention in the world thanks to him.

Tommy Krångh says it is absolutely fine that the viewers have opinions about the sign language version of the song contest.
– Many have, as you know, opinions about the song contest, for example about lyrics, anchors’ and contestants’ clothing styles and hairstyles. It is just nice if the deaf do the same thing, Tommy Krångh says and smiles. He elaborates:
– I am more than willing to join the discussions about sign language quality and how we can continue to develop further.
He wants to emphasize that there is no right or wrong when it is about art, which music is a part of. Certain lyric texts are not easy to understand according to him. Sometimes a sign language performer has to let a viewer to slowly take in the message of the lyrics or think of what the artist really wants to convey. It is why it is not always possible to aim while translating so that the viewer perceives immediately.
– But it is SVT that decides how it shall be conducted, not me, Tommy Krångh says.

SVT will show the sign language version of the Eurovision Song Contest semifinals and final in SVT Play. Right now the Swedish contestant, Måns Zelmerlöw, is one of the favourite tipped. If Måns Zelmerlöw wins the European Song Contest in Vienna, will then SVT offer sign language performance in International Signs of the contest next year? Håkan Björklund, project manager for news and accessibility at the sign language division of SVT, says smiling that it is possible.

(This article is also available in Swedish. Read here.)